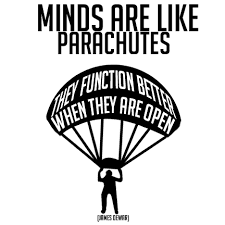 
The twin worlds of health care and education tend to be conservative places. New ideas are treated with scepticism, whilst entrenched dogma often persists without question. Although this culture makes it hard for new and valid ideas to take hold, it also serves to prevent dangerous, costly and unethical practices from gaining traction. However, this situation really only works if we can keep an open mind.

Over the past month I have read two interesting papers that caused me to question some assumptions I had held - specifically about the notion of visceral manipulation. On first glance the concept of moving one’s internal organs for some therapeutic effect seems far-fetched. Indeed, every rationale proposed thus far for visceral manipulation has, for me at least, not satisfied the first hurdle of even being biologically plausible. There are just too many unproven assumptions about the supposed dysfunction occurring, the reliability of palpatory methods, and the efficacy of the treatment. Apparently the goal of such treatment is "to encourage the normal mobility, tone and motion of the viscera and their connective tissues. These gentle manipulations can potentially improve the functioning of individual organs, the systems the organs function within, and the structural integrity of the entire body" (1). While such notions are admirable, they are not backed up by the quality of evidence one would hope might exist to support a revolutionary new treatment.

But does this mean that visceral manipulation is entirely without merit? Perhaps not. A recent study in the European Journal of Pain suggests that the use of visceral manipulation might be useful in the long-term management of lower back pain (2). While the short-term benefits weren't obvious, those undergoing visceral techniques did show benefit over a longer duration, prompting the authors to suggest that, "It is possible that, with continuing visceral nociceptive input, control patients experienced greater rates of recurrences of LBP compared with the visceral manipulation group."

This isn't the only study to find clinically meaningful benefits to visceral manipulation. A paper by McSweeney et al in 2012 examined the immediate effects of sigmoid colon manipulation on pressure pain thresholds in the lumbar spine (3). In this study,
"Pressure pain thresholds were measured at the L1 paraspinal musculature and 1st dorsal interossei before and after osteopathic visceral mobilisation of the sigmoid colon. The results demonstrated a statistically significant improvement in pressure pain thresholds immediately after the intervention (P < 0.001). This effect was not observed to be systemic, affecting only the L1 paraspinal musculature. This novel study provides new experimental evidence that visceral manual therapy can produce immediate hypoalgesia in somatic structures segmentally related to the organ being mobilised, in asymptomatic subjects."
So it just might be that such techniques are clinically useful. But what of the theories used to guide their application and explain their action? Unfortunately there is a paucity of sound research to underpin the biological construct of 'abnormal visceral motion', or the reliability of methods used to detect this phenomenon. Most of the available literature originates from our osteopathic colleagues, but the explanations given tend to remain abstract in nature and devoid of concrete facts or ideas. Attempts have been made to measure kidney mobility using diagnostic ultrasound (4), but whether the differing patterns of motion represent a true 'abnormality', or just normal human variation remains to be seen. However, is a motion-based model of organ dysfunction actually necessary to support the use of visceral manipulation? Could it be that the existing theories are completely wrong, yet the treatment itself might be useful for some other reason?

This brings me to the second intriguing paper that I reviewed in recent weeks, entitled "You May Need a Nerve to Treat Pain - The Neurobiological Rationale for Vagal Nerve Activation in Pain Management" (5). In this article De Couck and colleagues reviewed the role of the vagus nerve in modulating pain signals, discussing five distinct mechanisms by which it exerts inhibitory effects upon the pain experience. They wrote,
"The vagus nerve may play an important role in pain modulation by inhibiting inflammation, oxidative stress, and sympathetic activity, and possibly by inducing a brain activation pattern that may be incongruent with the brain matrix of pain. Finally, vagal activation may mediate or work in synergism with the effects of the opioid system in pain modulation. All these mechanisms are thought to influence neuronal hyperexcitability, culminating in the perception of less pain. For all the above neurobiological reasons, it seems justified to increase vagal nerve activity to reduce pain as this targets all 5 mechanisms with 1 intervention. This hypothesis is supported by experimental studies on animals and preliminary intervention trials on humans."
The vagus nerve has been used experimentally to influence pain in a variety of fashions. Simple deep breathing will augment vagal activity and has been shown to reduce pain, while electrical stimulators have been trialled in both implantable and transcutaneous forms (6). In each case, it appears that vagal stimulation influences central pain processing, rather than peripheral nociceptor activity. Could it therefore be that visceral manipulation, as performed by chiropractors and osteopaths, serves as a novel form of vagal stimulation? We might therefore suggest that the established theories of visceral manipulation as a tool for improving organ mobility be revised in light of more biologically plausible mechanisms. Perhaps the true value of visceral manipulation lies in its ability to increase vagal inhibition of pain, leading to widespread suppression of nociception from multiple sources? If this is so, then it would require the active proponents of visceral manipulation to update their understanding and refine their message. But will this happen easily?

At this point I should point out that I am not trying to single out the supporters of visceral manipulation for criticism. Indeed, the pretext of this article is to maintain an open mind, and I have found the topic to be one that lends itself to this exercise very well. So often the field of biological science is challenged to redefine its theories when new evidence comes to light, and we must learn to walk a balanced line of judgment. Unfortunately, this can be difficult once we have become emotionally invested in a practice or an idea. When presented with new information that conflicts with our long-held beliefs it is both easy and natural to dismiss it out of hand. Cognitive change can be costly, both in terms of mental effort and the possible impact upon our established patterns of practice. According to Chris Mooney in "The Science of Why We Don’t Believe Science” (7), it can be extremely hard to convince others of new ideas simply by presenting them with evidence and argument. Indeed, often this can have the opposite effect.
"...an array of new discoveries in psychology and neuroscience has further demonstrated how our preexisting beliefs, far more than any new facts, can skew our thoughts and even color what we consider our most dispassionate and logical conclusions. This tendency toward so-called “motivated reasoning” helps explain why we find groups so polarized over matters where the evidence is so unequivocal...

The theory of motivated reasoning builds on a key insight of modern neuroscience: Reasoning is actually suffused with emotion (or what researchers often call “affect”). Not only are the two inseparable, but our positive or negative feelings about people, things, and ideas arise much more rapidly than our conscious thoughts, in a matter of milliseconds - fast enough to detect with an EEG device, but long before we’re aware of it. That shouldn’t be surprising: Evolution required us to react very quickly to stimuli in our environment. It’s a “basic human survival skill,” explains political scientist Arthur Lupia of the University of Michigan. We push threatening information away; we pull friendly information close. We apply fight-or-flight reflexes not only to predators, but to data itself..."

'We apply fight-or-flight reflexes not only to predators, but to data itself.'

"In other words, when we think we’re reasoning, we may instead be rationalizing. Or to use an analogy offered by University of Virginia psychologist Jonathan Haidt: We may think we’re being scientists, but we’re actually being lawyers. Our “reasoning” is a means to a predetermined end - winning our “case” - and is shot through with biases. They include “confirmation bias,” in which we give greater heed to evidence and arguments that bolster our beliefs, and “disconfirmation bias,” in which we expend disproportionate energy trying to debunk or refute views and arguments that we find uncongenial."
So faced with new ideas it seems very 'human' to resist the cognitive burden of change. However, change we must if we wish to remain up-to-date and relevant as a profession. I would suggest that there are two distinct personality types that we need to consider when reflecting upon the subject of keeping an open mind.
1. The traditional 'scientist' type, who remains cynical until there is an overwhelming body of accepted evidence. These individuals use their faith in science to resist change.

2. The front-line clinican, who may view the greater scientific community with scepticism and as having an overly pessimistic view of the realities of clinical practice. These individuals use their lack of faith in science to resist change.
Obviously there are many other personality types who lie in between these polar opposites, but it is these two stereotypes who probably have the most difficult time keeping an open mind. To quote George Bernard Shaw, "The reasonable man adapts himself to the conditions that surround him... The unreasonable man adapts surrounding conditions to himself... All progress depends on the unreasonable man."

But why should we even care? Does it really matter if clinicians still explain their treatment rationales using ideas that are somewhat outdated?

I would suggest that it does matter, because in health care at least, truth is preferable to fiction. As our understanding improves, so does our capacity to target our treatment better. Furthermore, the long-term future of the chiropractic profession is one that will increasingly become intertwined with other health professionals and third-party payers, all of whom need to understand chiropractic through contemporary neuroscience theory. It is my contention that much of the clinical practice of chiropractors is uniquely helpful to our patients, but it just might not work for the reasons that we've traditionally thought. As long as we maintain an open mind we can retain the practical usefulness of our techniques, while upgrading the theories supporting their application.
Something to think about...Dr Matthew D. Long
BSc (Syd) M.Chiro (Macq)